Whilst moving house some time ago I had moved my home ESXi server to the office on a different VLAN to make sure my Exchange server and other things stayed connected whilst my life was moving around in boxes.

My old Server was an Intel rack mount server SR2500. It used to live on the 3rd floor of my old townhouse, this meant I never really noticed just how loud it was when running. Which I soon discovered when I finally had things ready and moved the server to my new ‘server closet’ in my new home. Even with 2 doors and a blanket blocking air gaps between it and living areas as well as bedrooms it could be heard. Whilst the WAF (Wife Approval Factor) was currently high (mainly due to having our media collection accessible on a fast connection again), I didn’t expect it would last more than 4-5 days before ‘that thing’ had to go.

Solution: Build a new home server based on desktop hardware for that nice quiet factor.

As will be detailed in later posts at some stage I run anywhere from 6 – 12 VM’s and need at least 16GB of RAM. I needed enough CPU power to at least be on par with the old server, if not far exceed it. (of course this was technically an upgrade

After two hurried nights of research on what hardware works well with ESXi 5.1 I came up with the following list:

Old equipment I had hanging around:

To cut a long story short(er), I purchased the new components and then used my rusty hardware skills to bolt everything together. Shut down the old server, moved needed hardware to the new server, plugged in a fast USB stick, inserted a ESXi 5.1 Installable CD, installed away. I booted up found the RAID array’s, imported my VM’s and booted up perfectly. My biggest surprise was that even with all VM’s running I was getting between 50-100% better performance. Not bad for a CPU with ‘only’ 4 physical cores (even though I had hyperthreading enabled).

The only downside is that ESXi (even with VCenter) no longer reports on FAN speeds/status or CPU temperature. It looks like I’ll have to dig out my SNMP enabled 2 channel temp sensor and integrate it just for safety. The only Intel Z77 (or related) motherboards that appear to give this info appear to be Supermicro server boards, which of course would have added $150-200 to my build cost. 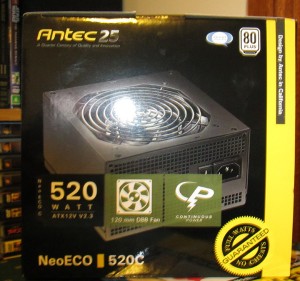 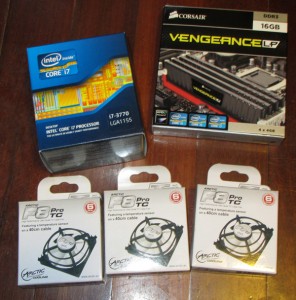 I’ll post more details in future, including the server’s location.